The California-based tech giant has unveiled a raft of new products including a subscription video service and a fee-free credit card as part of its new focus on services rather than devices. 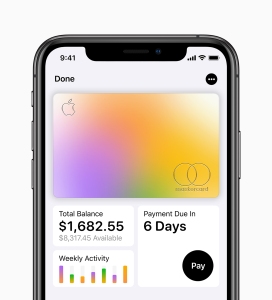 The Apple Card will be available as both a physical card and in digital format within the Apple Wallet. The company says it has been “designed to help customers lead a healthier financial life.” The card which will become available in summer 2019 to US customers offers users cashback on purchases and will be free of fees, including annual, late, and international fees, according to the company’s VP of Apple Pay, Jennifer Bailey.

“Apple Card builds on the tremendous success of Apple Pay and delivers new experiences only possible with the power of iPhone,” said Bailey. “Apple Card is designed to help customers lead a healthier financial life, which starts with a better understanding of their spending so they can make smarter choices with their money, transparency to help them understand how much it will cost if they want to pay over time and ways to help them pay down their balance.”

Inspired by the success of other streaming services such as Netflix and Amazon Prime, the tech corporation also unveiled its own hotly-anticipated video subscription service. The Apple TV+ app will include shows from providers including HBO and Hulu as well as original content starring the likes of  Oprah Winfrey, Jennifer Aniston, Reese Witherspoon, Octavia Spencer, J.J. Abrams and Jason Momoa, many of whom were present at the Apple launch event which took place on 25 March 2019 in California, US. Legendary film director Steven Spielberg will also create original content for the service.

The app will not only be available  on Apple devices but for the first time on third-party platforms including Samsung smart TVs, Amazon Fire TV, Roku, Sony and LG.

Pricing and availability for the Apple TV+ video subscription service will be announced later this fall (autumn), the company said.

“We’re honored that the absolute best lineup of storytellers in the world — both in front of and behind the camera — are coming to Apple TV+,” said Eddy Cue, Apple’s senior vice president of Internet Software and Services. “We’re thrilled to give viewers a sneak peek of Apple TV+ and cannot wait for them to tune in starting this fall. Apple TV+ will be home to some of the highest quality original storytelling that TV and movie lovers have seen yet.”

The company also announced Apple News+, a subscription news service providing readers with access to over 300 news and magazine titles including the Wall Street Journal, New Yorker, Esquire, Vogue and National Geographic. The platform will cost USD 9.99 (GBP 7.50) per month, and will be available immediately in the US and Canada and in Europe later this year.

In addition to this, the tech firm unveiled Apple Arcade, a gaming portal with over 100 games which will be available to play offline.

TJC offers an extensive global network of professional & experienced multilingual translators, proof-readers and interpreters. We also have academic researchers, specialists and speakers, who are all native speakers of over 100 languages. Our expert translators and interpreters are based all over the globe and can assist you with projects of all kinds.

For translation and interpreting services in Japanese, please visit our sister site, The Japanese Connection.

See our LinkedIn profile or visit us on Twitter

This entry was posted on Monday, March 25th, 2019 at 9:27 pm and is filed under Uncategorized. You can follow any responses to this entry through the RSS 2.0 feed. You can leave a response, or trackback from your own site.