The ‘Suiso Frontier’ vessel was launched on 11 December 2019 from the Kawasaki Heavy Industries shipyard in Kobe, western Japan, the company said in a press release. 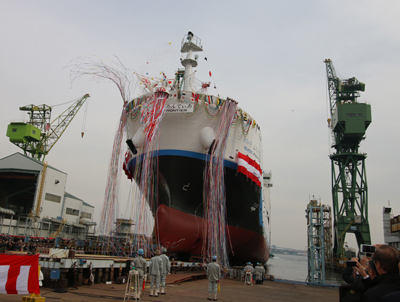 The carrier ship has been designed to transport hydrogen produced in Australia to Japan. Measuring 116m long and 19m wide, the vessel is capable of conveying around 1,250m3 of liquid hydrogen, chilled to minus 253 degrees Celsius, over long distances by sea. Kawasaki will begin testing the new technology during the fiscal year 2020, and plans build an even larger vessel by 2030.

According to a report by NHK World, the head of the company’s hydrogen development centre, Motohiko Nishimura, says his team will aim to commercialize the carrier because liquefied hydrogen will likely be a key to future energy.

Hydrogen is regarded as a clean energy source because it does not emit CO2 during use. Japan’s government aims to put 200,000 hydrogen-powered cars into use across the country by 2025.

TJC provides professional translation and interpretation services with specialists working in a range of fields including government and policy, economics and political services. Indeed, our level of specialism coupled with excellent customer service accounts for our ever-expanding list of clients from around the world, including the USA and Japan. For further information about what we can offer your organisation, please visit our website or contact us. You can also visit our sister site for professional Japanese translation and interpretation services.

See our LinkedIn profile or visit us on Twitter

This entry was posted on Thursday, December 12th, 2019 at 10:19 am and is filed under Biofuels, car production, Energy, Engineering, Environment, hydrogen fuel, Japan, Japanese company, manufacturing, Renewable Energy, renewable energy, Shipping, Transport. You can follow any responses to this entry through the RSS 2.0 feed. You can leave a response, or trackback from your own site.